Welcome to a work in progress

This blog is dedicated to the restoration and modification of a Glasflügel Standard Libelle H201B, and a tribute to those who have dared to do the same, and to those who are helping with seeing this dream take flight.

Humpty Dumpty - Part 2, time to get those parts back in!

Now that the main pneumatic tubing has been installed, and the wiring trunk for the batteries and the speaker was pulled, it's time to get hardware re-installed.

It was a joy installing the rudder yoke. 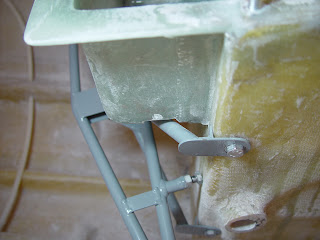 I found that the new battery box was just wide enough to prevent the top bracket support from aligning with the holes in the wheel well sides. I had to grind away a notch on both sides to allow the top bracket to mate up with the holes. The box was mounted on the same ledge as the original, but I did not notice that the brackets, when installed went up on both sides of the battery box. 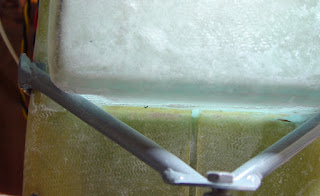 Fortunately, the bottom of the box was extra thick, and I didn't have to cut into opening. 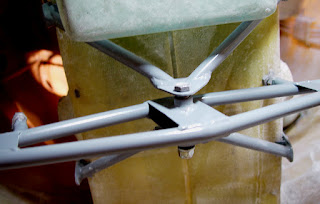 After the brackets were mounted, I installed the yoke. There was no vertical play in the bearing, and no room for shims or washers, with the exception for the washer needed for the nut. 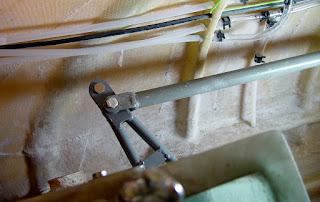 I attached the push rod for the rudder to the yoke, and found that it was binding through the full range of motion. While the yoke and mounts aligning to there original positions, the rudder push rod seems to require a slight uplift to attach it to the yoke arm. This will require an inspection from Robert before the flight tests.

During the motion range testing, I noticed that the nylon wheels that the push rod travels on were not moving, and that the rod was just sliding over them. Using a long tube, I was able to get them freed up by applying a fine silicon fluid in the bearings of the nylon wheels. After the wheels were able to rotate, the push rod moves better now. Is there a better lubrication for them? They sit about four feet into the fuselage, and out of reach to get at them without using a long straw!

I was ready to install the main gear struts and arm. I painted the gear well white to seal the fiberglass from oil grease and dirt. 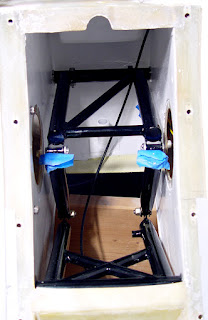 When it came time to but the struts in, I found that the forward shims were too tight due to the coat of paint near the openings. This required some cleanup before the struts would fit in place. 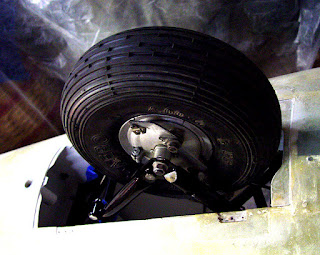 I had to install the main wheel back on the struts.

It has been two years since these parts were together. 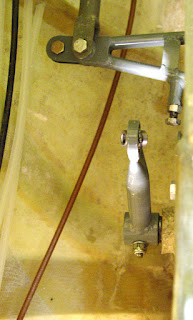 Back inside, there were two parts that needed to be installed to help prevent the strut rods from falling out. The rear strut rod is secured by two bolts mounted through the strut and rod in the wheel well. Also the actuator arm was bolted in. 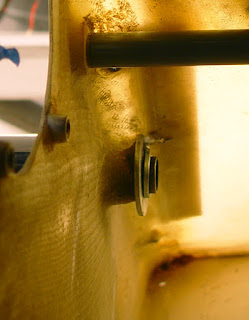 The forward strut rod is secured by a heavy washer and cotter pin attachment through a hole drilled through the end of the rod... Funny, I never removed this from my bird when I was taking the gear apart!?!?!?

How long were these parts missing?

I was able to see what parts were missing after inspecting a Libelle at Roberts shop!

I found the parts needed at the hardware shop, and they were approved to be used.

It would have been a bad day for someone landing this glider if that rod slipped in the gear shaft by just an inch or two. 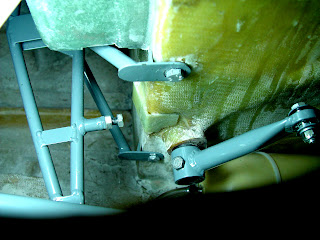 As part of an AD note, there were two rudder yoke stops that needed to be mounted to the outside of the gear well wall.

These parts were installed per TN 201-15 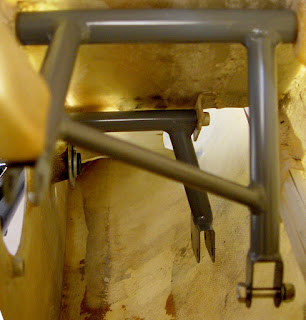 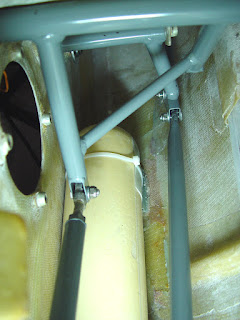 The bolts are a tight fit when it comes time to inserting them into the bearings.


I'm sure the stream of obscenities are still hovering over the skies of Edgewood after my ordeal with installing them! 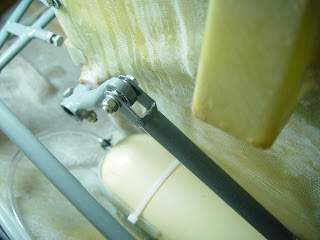 During the install, I found that the Capacity flask was too close to the actuation of the main gear push rod. I had to pop off the holds and move them a little further aft of their original mounting location.

The aileron actuator lever was also a tight fit. 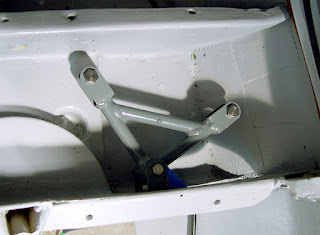 The stick, airbrake handle-rod and landing gear handle-rod were ready to be installed next. 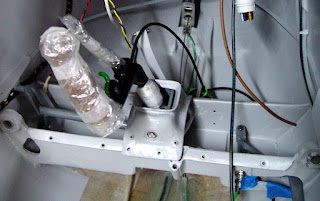 For the most part, the stick installation was straight forward, although, some of the bolts needed to be inserted into the bearings and rods before the stick and the housing were reseated on the tray. I wrapped plastic around the handle to prevent damaging it.
The plastic tubing used to shield the steel cables for the rudder pedal adjustment, and the tow release, needed to be pre-fitted before the final installation. 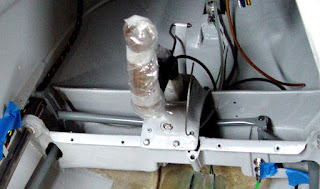 The final push rods were installed to complete this stage. 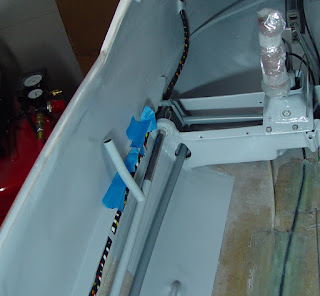 Last but not least, the airbrake and landing gear handles and rods were installed. 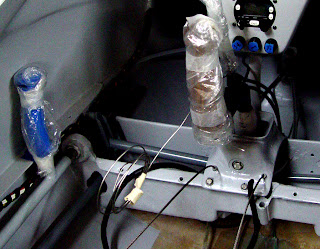 I wrapped plastic on the handles to protect them.

The steel cables were pulled though the center column support for the rudder pedal adjustment and the tow release. I then feed the brake cable into the handle on the stick.

The landing gear rod was installed to the linkage, and tested. The over-center adjustments will be checked by Robert before the glider can be signed off. 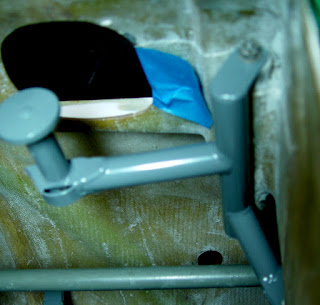 The final attachements are the aileron linkages, 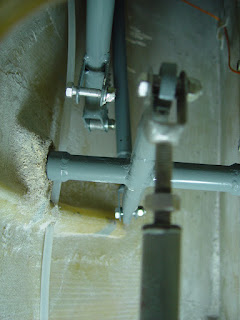 and the airbrake actuator.

The air brake actuator rod will be installed after painting, I don't want to damage the paint on this part before we start flying the glider.

All of these parts will need to be adjusted at the shop when we can finally test fit the wings and control surfaces.

With the majority of the inner connection completed, the Insturment panel finished, the next post on this sub-topic will cover the electrical wiring connections, speaker, PPT button and the microphone.
But this will need to wait a bit longer... The weather here has given me a break to start on building the new fiberglass trailer top!
Yet, another nightmare is just begining!
Posted by John Wahl at 6:22 PM 2 comments:

Mounting the transponder antenna started out as Operation Question Mark. I asked around to find out the best way to mount the antenna, what size the ground plane plate needed to be, what cable do i need to use... etc. And I either got no answer, or a use what you got kinda of answer.

I was told to use RG-58, then later found out that RG-400 was needed, but there are limitations to distance of the cable reach and so on.

So, this is what I was able to come up with.

1. You need to mount the antenna as far away from your body as possible. The microwave radiation can do you harm... I noticed that some people mounted the antennas near their instrument panel just over their legs... I hope cancer is not in your plans!

2. There are specific choices of cable you can use for the transponder, an most are not cheap. Plan the distance you want to mount the antenna, and then do a little research before buying that cable.

3. The antenna needs to be mounted on a metal ground plane on a fiberglass glider. Cooking foil can work from what I'm told, but I used a metal cookie lid that Robert suggested that I could use.

4. You need to find a way to mount the antenna, and it's orientation.


In regards to bullet point 4, Robert stated that their are two way you could mount the antenna. Pointed up, where Airliners could see you, then, ATC might not. And then you have the reverse, where if the antenna is mounted down, ATC can see you, and other traffic might not... You decide!?

I chose to mount the antenna down, since the location was under my O2 tank, and I did not want to reduce the signal coverage.

I also found that I could use RG-400, and that a section at the maximum distance for the transponder cable was 8 feet, which placed it a safe distance, yet under the tank.

The next question, was how to mount it? I became concerned when I found that there was a Tech Note from Streifeneder on how to mount the transponder antenna. But after waiting a few weeks after inquiring about the TN, and receiving no answer, I assumed that I was worrying about nothing.

Again, I was pondering about a mount that would work. I showed Robert an aluminum mount that I planned to mount off of the O2 tank bracket, but he handed me a mold he made from wood, and stated, "do you think this would fit?" 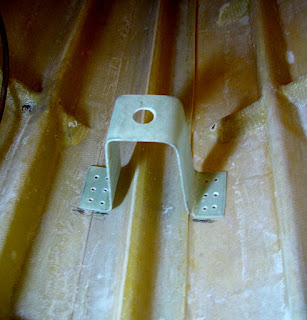 It was a simple and brilliant design!

It required a few layers of fiberglass to make.

I made this stand overnight, and cut the mounting hole in the center. I also drilled a few holes in the stand tabs to allow the epoxy cement to ooze through and help anchor the mount. 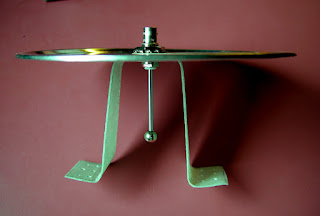 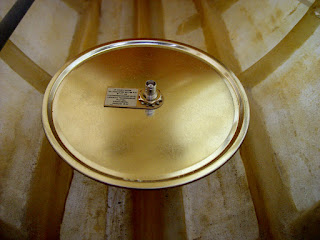 (You might notice, that I have the antenna mounted down... I hope ATC sees me.)

I applied a thick layer of thickened epoxy to the mount tabs, and then placed the completed antenna and mount into the fuselage. It required some weigh to be placed on the tabs and antenna top to hold it in place while the epoxy cured. 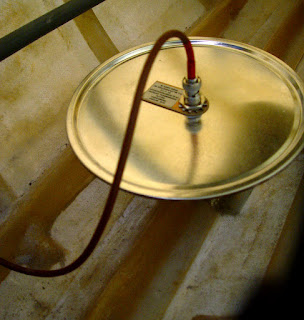 With the antenna mounted, I terminated the end of the RG-400 with the correct BNC connector, and carefully routed the cable though the fuselage to prevent any sharp bends that could compromise the structure of the cable.

The trick now is to be able to attach the other end to the transponder in the panel.
Posted by John Wahl at 7:20 PM 2 comments:

One of our favorite Soaring videos.

Here is one of our favorite Soaring videos.
*** Click here to view it! ***

A great song from Ed Kilbourn!

Cloudbase can be purchased from the SSA!

To Fly the Libelle Archive